Samsung is currently going gearing up for its much-awaited conference which dubbed for Galaxy Unpacked scheduled for August 5. The chaebol will launch a plethora of 4 new devices named are respectively  Galaxy Note 20 lineup, Galaxy Z Flip 5G, Galaxy Watch, and Galaxy Buds Live.

You might now be wondering where is the next-gen Galaxy Fold 2. For those who’re unaware, we recently saw a report claiming that we might not be able to see the Galaxy Fold 2 next month.

As per the new latest report, it looks like the firmware of the device is far away from being completely ready. This will eventually result in an unfortunate delay. Well, a new report has now coming to surfaced online and this one is contradicting the earlier. 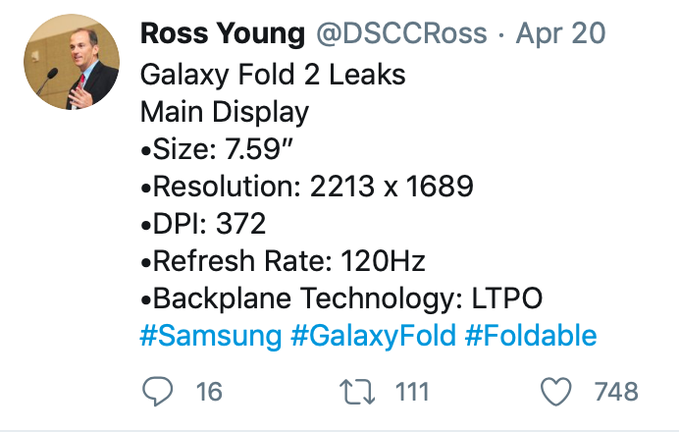 The report is coming which claiming that the device will be launched indeed on August 5 during Galaxy unpacked 2020. Even though the Device will unveil next month, you might not be able to buy it right away. As per the report, the next-gen foldable phone might not ship to customers until early October.

Apart from this, he also confirmed some already known specifications. We’re looking at the 7.59-inch display with a resolution of 2213 x 1689 pixels.

The display will also come with a 120Hz refresh rate along with LTPO tech. For those who’re unaware, LTPO is a short form of Low-Temperature Polycrystalline Oxide which is an OLED display tech.

It can offer a power-saving of around 5-15% when compared with LTPS tech.

This new report seems to be making sense considering Samsung was planning to follow the 3-month flagship launch strategy. As per this strategy, the South Korean giant was looking to launch its three flagship devices in succession.